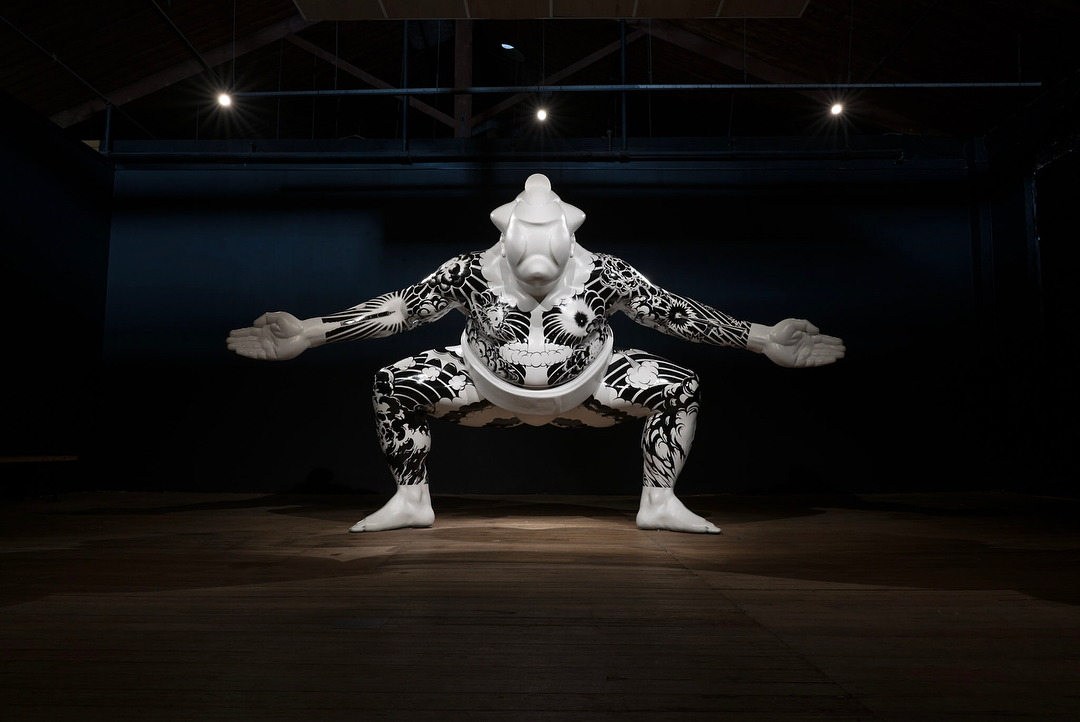 Thank you to everyone! The exhibition started today. photo by @a.h.mitchell Japanese culture is engaged in an ongoing battle against two opponents; it’s youth and the West. Like a colossal Sumo wrestler with expert cultural judo, by using its opponents own weight as a weapon, Japan somehow keeps the fight in equilibrium. It rolls with each blow, assimilates culture, pushes back with its own creations and always finds balance.

The Japanese phrase ‘ORA ORA’ has no direct English translation. It’s a threat or battle-cry, commonly used by Japanese low-lives and thugs. Recently, the phrase has also found itself used in Manga as the onomatopoeia for exertion while punching or kicking someone repeatedly, with ironic undertones. ‘ORA ORA’ is a deceptively complicated phrase and a fitting title for this exhibition. Like everything that Shohei does, his choice of title has a layered meaning that elegantly ties into show’s central theme.

On the macro level, Japans cultural dynamic with the West can seem fluid. It has, after all, been going on for centuries. However, on the smaller scale, for Japanese individuals, this dynamic often results in a conflicting sense of cultural identity. Irreconcilably different aesthetics and contradictory philosophies occupy the Japanese consciousness; Tea ceremonies and vending machines, Buddhism and consumerism, Zen simplicity and a frenetic mess of logos. All vying for positions in the Japanese psyche. The resulting tension and its social implications thematically lie at the core of this exhibition.

ORA ORA’s hero image, ‘Counterstrike’, portrays three schoolboys armed with bats knocking a salaryman to the ground. The boys slap the smart-phone out of his hand and prepare to stomp the crap out of him. The boy in the centre of the composition, the one wearing a Superman t-shirt, bites his bottom lip as he prepares to swing a bat into the man’s head. The three boys wrists and bags are adorned in car-keys and watches. Status symbols of consumerist Japan, reduced to the trophies of a tribalist backlash, presumably looted from other attacks. This is traditionalism responding violently to the shallowness of modernity. The words ‘New Era’ on the boy’s cap takes on a new meaning when written Kanji and supported by the nationalistic stickers that decorate the nailed bat in the foreground.

Shohei’s illustrations depict the negative aspects of modernity and progress. His main message is clear — a simple critique of consumerism. But if we look deeper, there is more to this illustration. As Japan’s population ages, it has turned it’s back on Family in favour of materialism. The youth, in this case, are paradoxically presented as the protectors of ancient cultural traditions. By portraying the youth as the custodians of tradition, Shohei is suggesting that there is an optimal social structure partly nested in traditional values. Furthermore, when viewed in the context of Japan’s cultural dynamic with the West, the Superman t-shirt signifies imported popular culture while at the same time alludes to the Western philosophical rejection of nihilistic materialism. In both senses, it is a foreign concept that has been repurposed to support the preservation of Japanese culture. A perfect example of Japan’s adaptive ‘cultural judo’ cleverly hinted to us through Shohei’s use of symbolism.

Shohei Otomo is the most talented person I know. His technique is incredible, his work is flawless and his imagery is awe inspiring. But, technique alone is superficial, and it does not define a great artist. What makes Shohei Otomo a great artist is his sophisticated and elegant use of symbolism. Everything in Shohei’s work has significance. Each symbol within Shohei’s work has layered and dynamic meanings which illustrate a critical meta-analysis of modern Japanese society.

This is the essence of Shohei’s work and I invite you to approach each piece in his show with this in mind. I hope you enjoy ORA ORA.